‘The story of the way Britain works today.  Or doesn’t.  Something like that…’

Very funny, very clever, very dark.  Writer Chris Loft has created something pretty special with this script, which came to our attention in 2016.  We’re now in the first stages of research and development to see how it might be possible to fuse this production with current debate in the world of work. 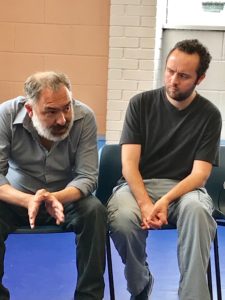 “We’re killers, Manny.  And the thing I can’t get over is the arrogance. We think we can shape things as we want them.  We wipe out whole families, colonies, species.  The arrogance of humanity – it’s staggering”.  Nathan has been a pest control officer for over 30 years.  But now he’s had an epiphany, and he’s secretly harbouring a colony of rats in the loft.

We discovered this smashing little piece by writer Poppy Hollman through StageWrite 2018, and after chatting with her about the possibility of developing it, took it to full production at Bedfringe in July 2019.  Our cast included StageWrite ensemble regulars James Harrison, Natalie Castka and Matt Ingarfield under the directorial expertise of Cally Lawrence.

We had a blast performing the Yule Lads through the 2018 Christmas period.  Here’s what people said about the production:

“… just the right balance of humour and sentiment, and a number of excellent songs that complement the finely crafted script.”

“Funny, clever and surprisingly poignant – either the theatre was extremely dusty during the second song, or I had something in my eye!”

“It was so good that my daughter watched it twice.”

“Just back with the family from watching The Yule Lads performed by the wonderful LifeBox Theatre. Hugely entertaining show, well written and performed. Perfect for the family – lots of laughs and a Christmasy warm feeling. Thoroughly recommend it.”

If you’re interested in booking us for your school or theatre, do drop us a line.